What is the maximum thickness material a waterjet can cut?

A waterjet can cut through almost any thickness of material. For Flow machines, the maximum thickness is 300mm however this varies depending on your machine model. The key considerations with thick materials are: (a) the weight rating on the waterjet table, and (b) whether the workpiece can be supported in such a way that the waterjet does not also cut the workpiece support platform.

What happens to the garnet after it has been used to cut material, and how do I remove it from the waterjet bath?

Spent garnet is accumulated in the waterjet bath below the cutting table. The garnet will accumulate over time, and will eventually need to be removed by shovelling out manually, by a vacuum truck or with an automatic sludge removal system.

Garnet waste is recyclable, however, the cost of drying and re-screening to a standard acceptable for waterjet is significant. Due to the fact that a large proportion of the garnet is broken down to fines during the waterjet cutting process, this is generally deemed uneconomical.

What considerations are important when selecting abrasive?

Selection of the right abrasive for your waterjet is a critical consideration. The key factors which will determine how consistently and efficiently the waterjet cuts include:
(a) Consistent particle sizing – rogue grains cause blockages in the focussing tube
(b) Proportion of dust and fines – dust causes problems with flow characteristics of the abrasive, and fines are particles which are too small to serve any useful cutting action.
(c) The hardness of the grain - Soft grains fragment and break down on impact with the workpiece. Efficient waterjet cutting action requires tough, durable grains. Generally, older grains such as Western Australian’s GMA garnet, have been subjected to a longer weathering process which makes this material perfect for production cutting.

Why should I buy a chiller?

The purpose of the chiller is to maintain an acceptable oil temperature in the intensifier pump. If desired, it is possible to use mains water as the cooling medium, however, the effectiveness of this is dictated by: (a) the temperature of the incoming water - (in hot climates, the incoming water may be too hot to cool the oil effectively, which will lead to the pump over-heating, and (b) whether the amount of water consumed for cooling is acceptable (in a typical pump, the volume of water required for cooling alone is 11.5 litres per minute (690 litres per hour)).

How do I clear a blocked focussing tube?

Clearing blocked focussing tubes can be a menace – consider the force applied to the debris when forced into the focussing tube at 55,000 psi!

Your focussing tube should now be clear and ready to cut!

Why should I create a member login?

When you create a login, you can buy parts online anytime for your convenience. If you don't have a login, you will only be able to request a quote for any products.

How do I create a member login?

Get your free price guide 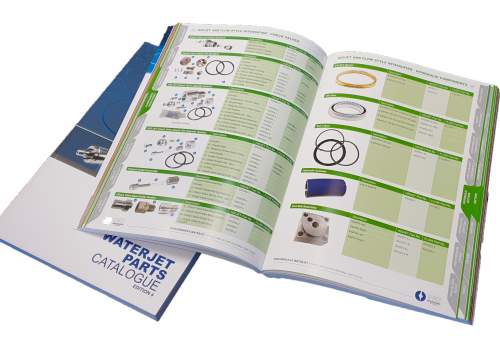 Fill In Your Details Below
to Download The Catalogue